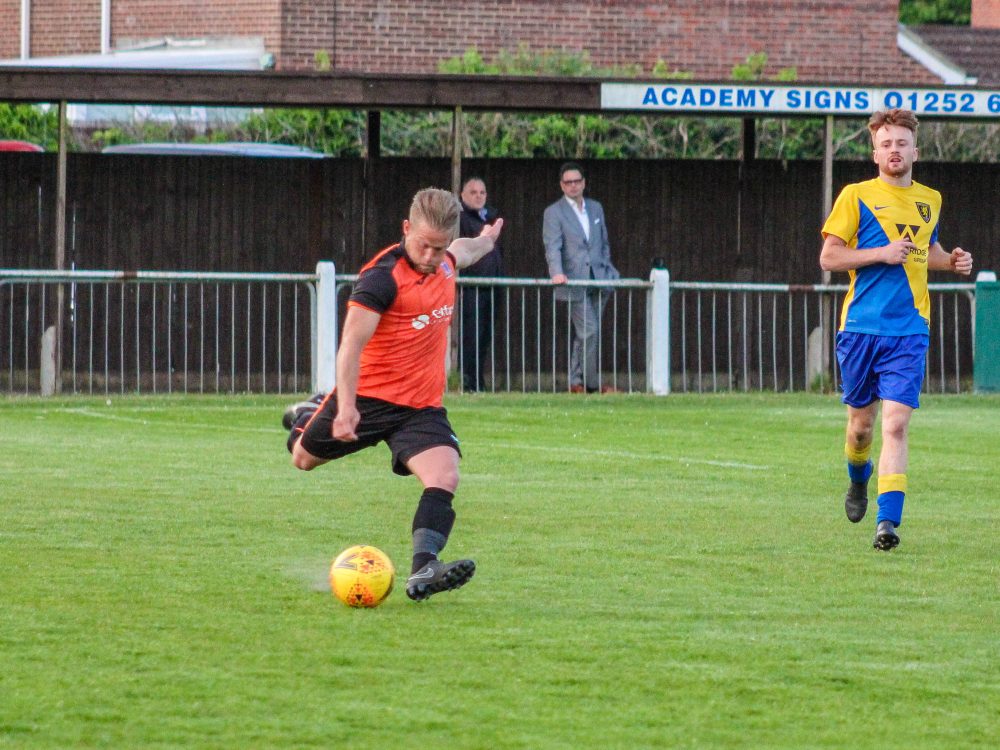 The perfect league start was set aside as GUFC kicked off their Premier Challenge Cup campaign against Knaphill Athletic.

GUFC lined up in a familiar fashion, opting against rotation for the beginning of the cup campaign. The Doots started the game in a calm and composed manner, shifting the ball from left to right. Guildford’s front-four began to look dangerous, turning the defenders and taking shots on goal.

After a relatively relaxed first twenty minutes with no real breakthrough despite the sustained pressure, GUFC found the net through Carpo. Knappers with some great feet on the edge of the box found Carpo, who toe-poked the ball into the far bottom-corner.

Guildford dominated proceedings and pressure mounted through multiple corners and attacking set-pieces. One of these set-pieces was delivered into the box and was dealt with by the Knaphill defence. However, the referee had spotted a foul on Greg Douthwaite in the box. Greg took the responsibility and attempted to go down the centre of the goal, only for it to be saved by the legs of Knaphill’s goalkeeper.

Greg soon made-up for his earlier penalty miss with his third goal of the season. Malice’s long counter-attacking clearance kick cause the Knaphill’s defender a host of problems as he tried to turn and deal with it. The ball fell to the feet of Greg with a superb strike into the bottom corner. Knaphill’s keeper had no chance with this one.

A terrific first half did not translate into the second as the game became very stop-start. Multiple free-kicks, arguments and disagreements ensued between both teams and the referee meant the game did not flow in a positive way. Nonetheless, GUFC never felt much pressure from the Knaphill attack.

Performances and energy levels dipped throughout the bulk of the second-half, although some good chances were squandered through Whitsy and Carpo. The game was wrapped up as Will Sharman opened his account for the club in fine fashion. In his typical style, cutting in from the left, he lashed the ball from 25 yards, bouncing  just in-front of the goalkeeper’s outstretched arm and into the left side of the net.

Knaphill began to hold the ball better and create better chances for themselves, but Mal never required to call upon his talents to prevent them from scoring. Time elapsing, Will delivered another corner ball, which landed into a crowd of players and was headed into the empty net by Phil.

During the dying minutes, Adam took the ball around the opposition left-back and was hacked to the ground to give Guildford their second penalty of the afternoon. With Greg off of the pitch with a groin injury, Ben Fox stepped up but it was another poor penalty and the keeper saved once again.