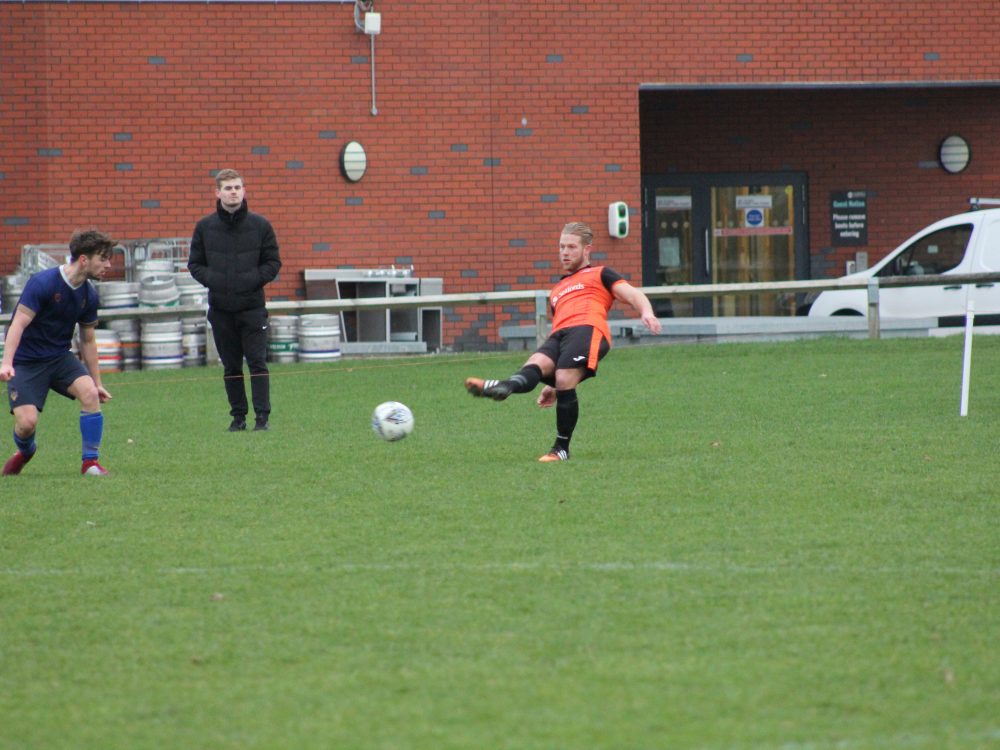 The quarter-finals of the County Cup meant that GUFC headed to Lyne to try and avenge the defeat from December. Guildford saw Vinnie come back from suspension and stick to the 4-3-3 formation from last week’s draw against Shottermill & Haslemere.

Guildford started the dominant side with Vinnie winning high balls and causing chaos along the front line. It wasn’t long before Guildford were in front after a corner was poorly headed clear, which landed at Greg’s feet who shuffled it onto his left and he struck the ball sweetly. The ball took two deflections and flew into the top corner of the net.

The Doots were continually pushing forward and piling pressure onto the Lyne back four, with Carpo and Leigh creating chances from the right-hand side. The new formation allowed Foxy to push forward, who frequently broke down the right to deliver balls into the middle.

Lyne began to grow into the game, usually with a counter-attack from cross-field balls. The opposition striker being held to minimal chances and well marshaled by Phil and Trinder. Only a mistake from Ads in the midfield led to the striker swung a strike against a post but bounced across the goal line.

They made the breakthrough and got back onto level terms after a mistake at the back left the right-winger through on goal, his first attempt was finely saved but the rebound fell straight to the player’s feet who placed the ball into the empty net. An even fixture matched by the scoreline.

However, it didn’t take long for Guildford to build back into the ascendancy and begin having chances. Causing problems from Tidbury’s long free-kicks and corners, along with more crosses from both channels. Guildford regained the lead when Adam won a header in the middle that went through to Carpo, who took a touch on the left-hand side of the box and curled the ball into the top left corner of the net.

Guildford began the second-half knowing how important the next goal was, so far they’d battled and thrown themselves about. Showing real character against a tough team. The lads had risen to the challenge after a few poor performances and were tough across the pitch.

The game opened up and started going back-and-forth. GUFC still holding their own and killing Lyne on the attack with the front three. Lyne’s keeper was the reason for Guildford not racing away with the game as he continually made sensational saves, similarly to how he kept United out in December’s league fixture.

However, Guildford extended their lead through a long free-kick from Tids who played a beautiful ball, which was met by a cross-goal header from Phil. A vital goal in the game which gave Guildford some breathing space. Nevertheless, Lyne came fighting back and began breaking into the box more than they’d had all game.

Lyne managed to pull a goal back with 15 minutes remaining after some quick work down Guildford’s left side allowed Lyne’s substitute to cross the ball across the floor and it slipped through the Malice’s near post to bring the game back to 2-3. Causing a nervous last quarter of an hour.

Guildford to the game beyond Lyne when Greg escaped down the left-hand side and perfectly played the ball into the centre of the box to Carpo, he took a touch and finished to see the game off.

Despite Jenko hitting the bar and Carpo having further chances, there was a final nail in the coffin as Carpo completed a great hat-trick in the form of a direct free-kick. He leathered the ball against the wall and it rebounded back into his path, and with a first-time effort he curled the ball into the far corner.

Game over, and job done. An incredible performance against a very good side, in the face of adversity. The Doots head into the semi-finals with an away tie against Battersea Ironsides. Guildford are now the lowest rank side left in the competition, but with nothing at all to fear.