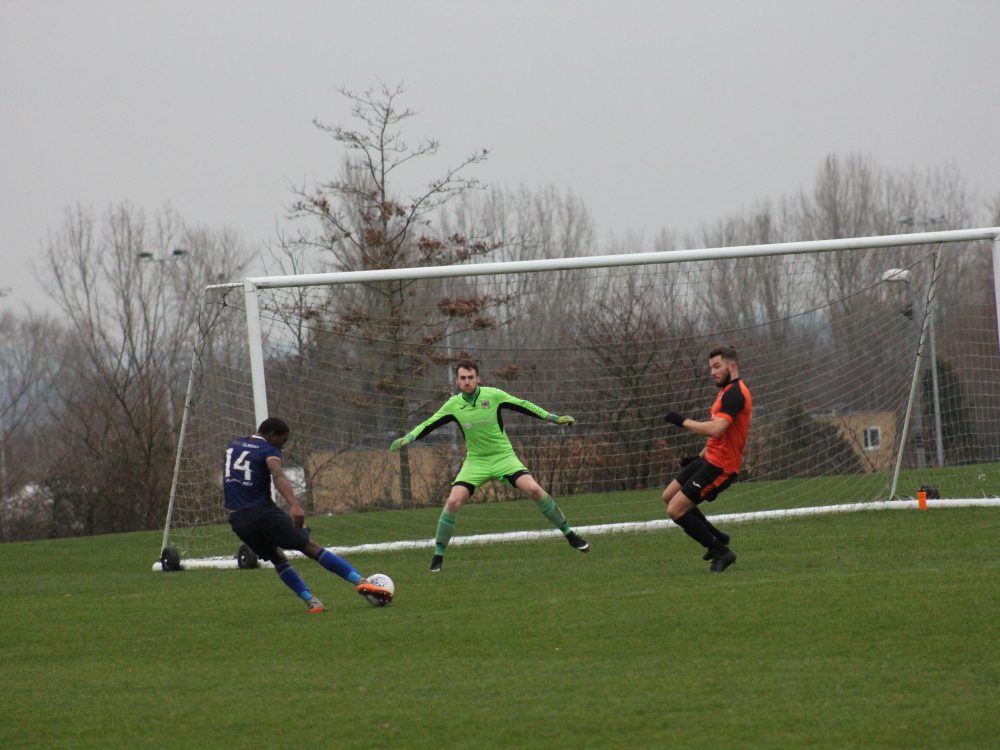 Guildford United headed into what would probably be their final home league game of the season against their familiar foe, Lyne. Knowing full well that a win would keep the pressure on the other teams at the top of the league.

Against a different-looking Lyne XI, Guildford started strong in blustery conditions. The first opportunity coming from a free-kick around the edge of the box, which Tidbury swept just wide of the keeper’s right post. GUFC continued to push forward and were getting caught on the counter on the odd occasion but still managed to maintain the upper-hand.

United managed to get the breakthrough, as Ads took the ball on the left wing, and curled the ball over the opposition centre-backs and Carpo side-foot volleyed off of the inside post and into the net. Doots were worthy of their first-half lead.

Despite Guildford being seemingly in control, Lyne continued to break down the right and eventually began to create chances. A simple ball over the top lead to a one-on-one situation, but Malice saved well and managed to save the follow-up that looked destined for the goal. Mal keeping GUFC in-front.

The half was affected by many stop-start issues with the wind causing havoc, however, Guildford went in ahead 1-0 in a game of relatively few chances.

Lyne came out with nothing to lose, and immediately created chances that called Malice straight into action. After quickly settling down, Guildford almost went ahead after a great cross from the right side gave Carpo an open header. The Lyne goalkeeper stuck out a strong leg and deflected it away to safety.

The game was becoming end-to-end and Lyne had their fill of chances throughout the middle stages of the second half. This time requiring some further heroics from Mal as he made an outstanding triple save. First of all, one-on-one, then blocking the follow-up. Finally, after they recycled the ball in the area, a deflected shot was tipped around the post for a corner.

There were chances at either end and the game was opening up widely. Will, Jenko and Carpo all having opportunities to strike from inside the box, but none of them truly testing the Lyne goalkeeper. Lyne managed to break through with long-balls over the top of Guildford’s back four and getting one-on-one chances. They hit the post on one occasion after Malice once again blocked with his legs.

The game was dwindling out, with both teams having missed golden opportunities. Lyne had a free-kick inside of their own half with a minute to play. The goalkeeper played a long and hopeful Hail-Mary style cross that was met by Lyne’s central midfielder and was flicked on into the far corner.

A dreadful way to concede and an awful time to do so. A draw that feels more like a loss and could potentially mean that Guildford have too much to do in order to try and obtain promotion. The lads are suitably devastated but look to the next two weeks with important cup matches.