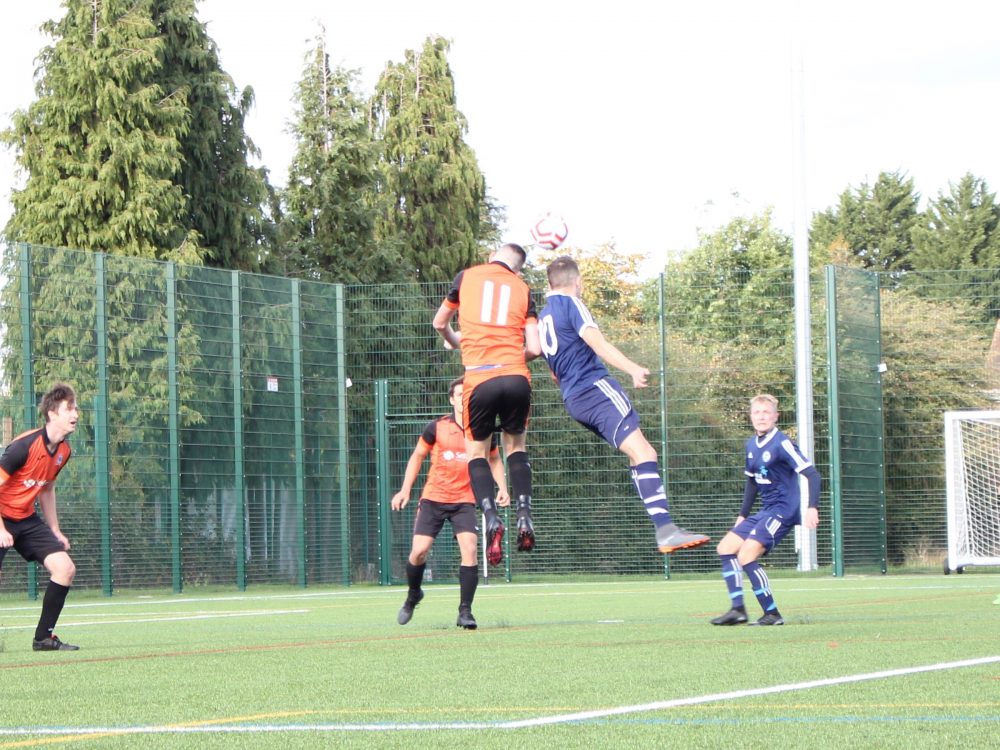 Following a week’s break after the contest against Manorcroft was postponed, Guildford were back in league action in a difficult away fixture versus Cranleigh. Last season, GUFC drew at Snoxhall Fields which effectively gave Lyne the title. The boys knew they would be in for a tough afternoon.

In treacherous conditions, Guildford kicked off in their usual 3-5-2 with only Mike missing through suspension. United found it difficult to play their usual possession-dominant game given the conditions and smaller area, but still managed to begin on the front foot. Both Carpo and Bickers as the striking partnership kept finding space down the wings and threatening with crosses. After 10 minutes, Guildford struck first, after a centrally positioned free-kick was curled in beautifully by Ketch. Nobby, at the back post, volleyed it against the keeper but it fell onto Carpo’s lap who tucked it away.

It wasn’t long before Guildford doubled their lead, after a good effort from Bickers led to a corner. Carpo’s corner was met by Nobby who was wide open in the middle of the box and he made no mistake by powering the header home. Nobby opening his account for the club after joining in the summer.

Guildford managed the game expertly in the opening 25 minutes and continued to pile the pressure onto Cranleigh who were at sixes-and-sevens. The third goal came when some serious pressure caused Cranleigh to struggle in their attempts to clear the ball, Greg managed to intercept an attempted clearance with a perfect header through-ball, which Bickers leapt onto but was cut down before he could get to the ball. Penalty to GUFC, Carpo slots it as he usually does.

Despite Guildford’s dominance, the game was about to change as Greg dived into a tackle that was deemed reckless and dangerous by the referee despite him taking the ball. The referee subsequently showed the skipper the red, and GUFC were having to play with 10 for the remaining hour of the fixture – a very tough ask despite the healthy lead.

GUFC had to hold their structure and be incredibly disciplined in order to see out the half with 10 men. Cranleigh threatened from a couple of corners, and one of them was met by the Cranleigh captain, heading for the far corner before Ads managed to knee it over the bar on the goal-line. Guildford held out long enough to go in at half-time with a three-goal lead.

Guildford United started the second half knowing that they had to dig deep and stay incredibly disciplined if they were to take all three points. With a solid defensive shape, they couldn’t have started the second half in a better fashion as Carpo was fouled in the box after some fantastic play from the striker, who had to shift to the right wing in order to provide balance to the under-manned side. Carpo completed his hat-trick at the 50-minute mark when he tucked away another penalty.

GUFC had to stay compact and in the middle, and managed to deal with everything that Cranleigh were throwing their way to this point. Some excellent defending from the back three of Westy, Phil and LT, with some dogged midfield work in front of them. However, United couldn’t keep the opposition at bay for the whole fixture, as around the three-quarter mark, a free-kick was poorly dealt with, and the second ball found it’s way out to Cranleigh’s right-side, where the ball was cut across and finished by the striker. Disappointing to have not held out.

Any nerves that may have been jangled were quickly eased, when the fantastic Bickers, who had worked tirelessly by leading the front line as a sole striker, managed to hit the scoresheet once again. Ketch danced through multiple Cranleigh midfielders before sliding the ball through at an angle, as Bickers touched and finished with his left foot to truly seal the game.

The rain continued to lash down and the surface was beginning to suffer dramatically as it became a quagmire to play on, with artificial lights benefitting the visuals of the game. Frustratingly, Guildford gave up another goal after again, failing to clear their lines, and the ball fell to the striker who laid it for the on-running midfielder who lashed it past Malice into the roof of the net.

With moments remaining, and exhausted bodies in both orange and blue, Guildford counter-attacked after a headed interception fell to Carpo on the right wing, who delivered a delicious cross onto Bickers’ head which powered past the keeper and into the net. Completing a superb away performance in very difficult circumstances.