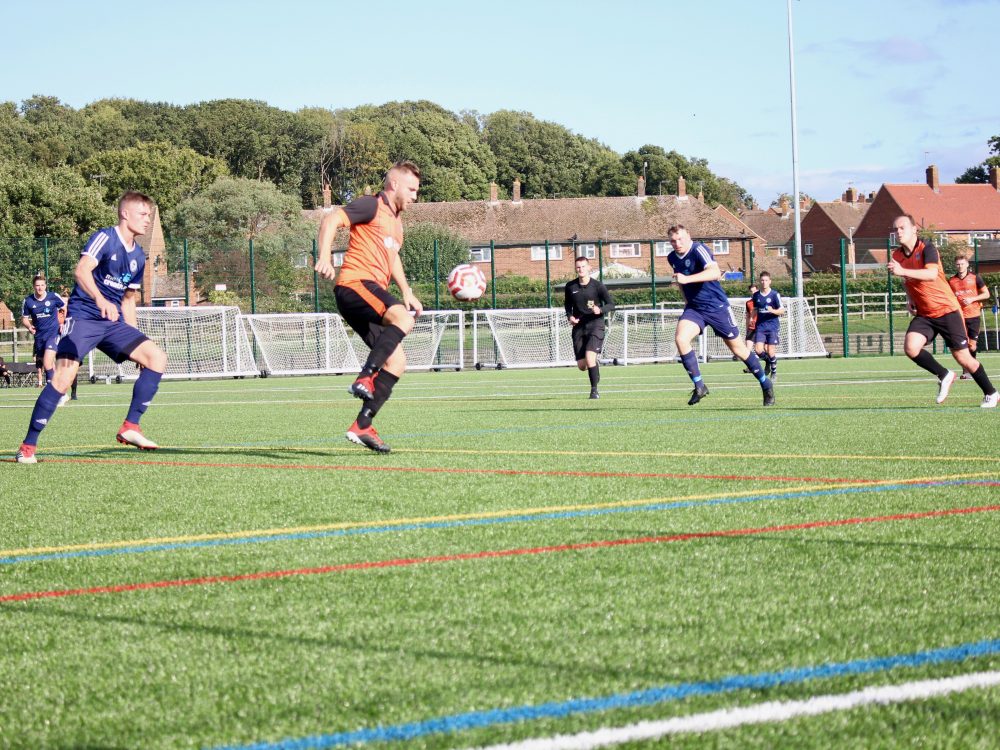 GUFC were back on home soil after a terrifically dogged away performance at Cranleigh last time out. Up against a difficult opposition in Milford & Witley, who beat Guildford twice out of three matchups last season.

With Greg suspended, and Nobby limping off with a hamstring injury last weekend, the Doots shuffled the pack as Jenko started in central midfield and vice-captain, Callum, regained his right-of-the-three role.

Guildford appeared to have turned a corner last weekend with an aggressive and dominant start, however, they fell back into bad habits as some sloppy play and poor organisation from the get-go. GUFC invited pressure by struggling to retain possession and needlessly firing the ball long.

After only fifteen minutes, Guildford found themselves behind after some poor play resulted in Milford playing the ball around in the box, the ball was laid off to the lively number 9 and went shoulder-to-shoulder with Callum as he was running away from goal. The player hit the floor, and the referee deemed it a foul, and a penalty was given. The Milford & Witley central midfielder making no mistake from the spot.

GUFC continued to be pressed off of the ball and give possession away cheaply, in dangerous areas too. This time the ball was given to the winger unnecessarily in the defensive third who slipped in the central midfielder. The midfielder rounded Mal in goal but was fouled on the edge of the box. Guildford, feeling lucky not to have conceded a second before the 20-minute mark, kept out the resulting free-kick with a fantastic Malice save to his bottom-left corner.

Milford were in the ascendancy, but Guildford managed to get themselves out of trouble thanks to their striking duo once again. Bicknell picking the ball up, evading defenders with quick footwork, and playing in Carpo to finish and equalise against the run of play.

United began to poke holes in the M&W defence as a long ball caused havoc, with their defence struggling to deal with it, Bickers intervened and lobbed the onrushing keeper after some superb pressuring of the shaky back four. Guildford by no means at their best, but somehow managed to head into the break with a one-goal lead.

After a dressing down at half-time, the lads came out the second half with a renewed sense of confidence and managed to control the tempo of the game by circulating the ball well down both flanks. Jon and Dean enjoying a lot of the ball on the wings and pushing the opposition full-back backward.

The boys continued to press and probe, with more and more chances being created. Milford & Witley struggling to cope with the firepower of Carpo and Bickers, along with the speed and work-rate from the wingers. However, Guildford would find their third goal as a result of a set-piece that was eventually crossed in, flicked on by Dean and powerfully volleyed into the far corner of the net from the edge of the box, by Jenko. A superb strike that rocketed past the onlooking keeper.

With 25 minutes remaining, GUFC looked to have sealed the game, after managing the occasion excellently. LT escaped down the left wing and played a long ball over the top of the defence onto Bickers, who they struggled to deal with all afternoon. Bickers doesn’t miss those and slotted it past the keeper to make it 4-1.

Despite thinking the game was in the bag, Milford soon pulled one back of their own. Guildford were warned by a couple of back-to-back corners, but couldn’t keep the opposition out as a simple corner was headed home by the previous goalscorer.

Guildford had clearly learned from poor performances and began to manage the game well, by keeping the ball and by bringing Vinnie on to cause further aerial problems for the Milford defence. His destructive forward-play earned it’s rewards with ten minutes remaining as Bickers was played through, past the defence, and he unselfishly reversed a pass into the centre of the box, as Vin smashed the ball through the diving defenders.

Overall a solid home win against a tough opponent, but an opening that the lads will need to avoid repeating if they are to keep their winning run going.