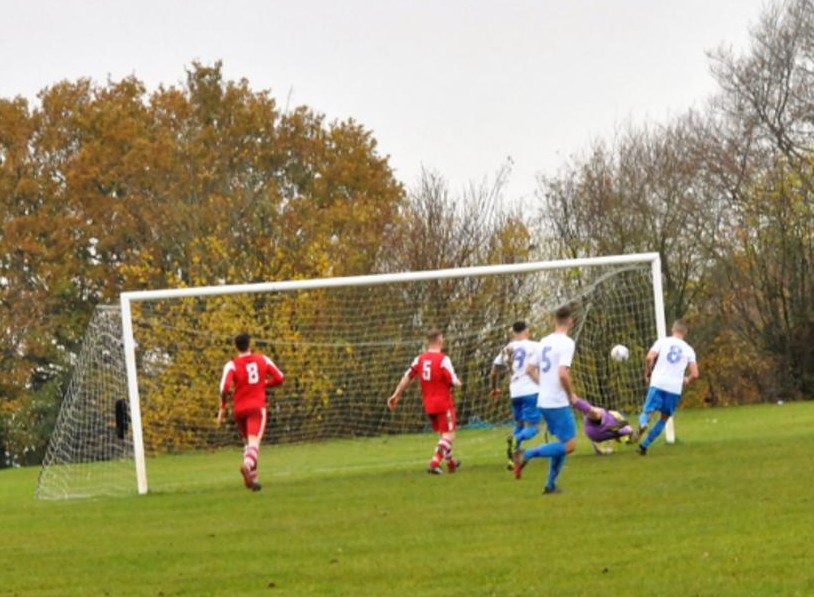 In the second round of the county cup, Guildford travelled the short distance to Merrow to come up against a strong side at the Elite level. The two sides met in pre-season as GUFC lost 3-2 on their new home patch.

With Greg still suspended, and Ketch not available, there was a fixer-upper look to the midfield three with Ads, Jenko and Vin looking to dominate the game. There was also a return for Tids against his former club, as he resumed his regular service on the right side of the midfield five, after a month out of action.

It was a bleak and dreary day as the pitch, only shortly after kick-off, looked as though it was going to be a spoiler for the day’s action. Both sides were struggling to get the ball down and play attractive football. Most of the attacking play was built-up on the wings for both sides, Jon and Tids providing attacks for GUFC, that amounted to little more than half-chances for Carpo and Bickers.

Multiple corners for Guildford also proved fruitless as decent headers couldn’t trouble the opposition keeper. Merrow grew into the game following a slow opening 20 minutes, and began turning the back three around, with pacey attacks. Counter attacking seemed to be their largest threat as on a couple of occasions they managed to have attempts on goal, one of them being finely saved by Mal.

The second half kicked off as the rain began to descend and cause additional surface issues. However, Guildford looked much more comfortable than the way that they finished the half. Ten minutes into the half, a corner was poorly dealt with by Merrow, and Guildford managed to circulate the ball back to Bickers, who had placed himself on the far left side of the box. He managed a whip a cross in, and Jenko was left completely unmarked glanced a header into the far corner.

With the scrappy affair becoming more tetchy as the game continued, Carpo twice causing Merrow defenders to receive a yellow card after beating them with his power and speed. Resulting free-kicks and crosses continually failing to create substantial opportunities for the Doots. Bickers, looking dangerous as usual, endured a frustrating afternoon after he was continually, and perhaps questionably, flagged offside.

As the clock ticked on, Merrow began to grow as Guildford sunk deeper to try and retain the one-goal lead until the end. The lively number 10 had a great opportunity but was denied by the large presence of Malice before being judged to be offside.

Carpo, in the opposition box, managed to swivel and beat his opponent whilst trying to find some space was tripped and the penalty was given. Carpo looking to put the match beyond Merrow, skied his penalty over the top-right corner. His first penalty miss in a GUFC shirt.

Despite this lifeline, Merrow were restricted to long-range efforts and crossed-in free-kicks and corners. All of which were superbly dealt with by the dominant defence, who were desperate to hold on to the second clean sheet of the season.

Carpo escaped the offside trap with seconds remaining and was galloping on goal with a certain one-on-one finish, but the final whistle was blown by the referee after sprinting 30 yards with the ball. Frustrating for the striker, but the team had knocked out a tough opponent in tough conditions. A thoroughly dogged and professional away performance that was epitomised by Guildford’s workrate across the entire pitch.