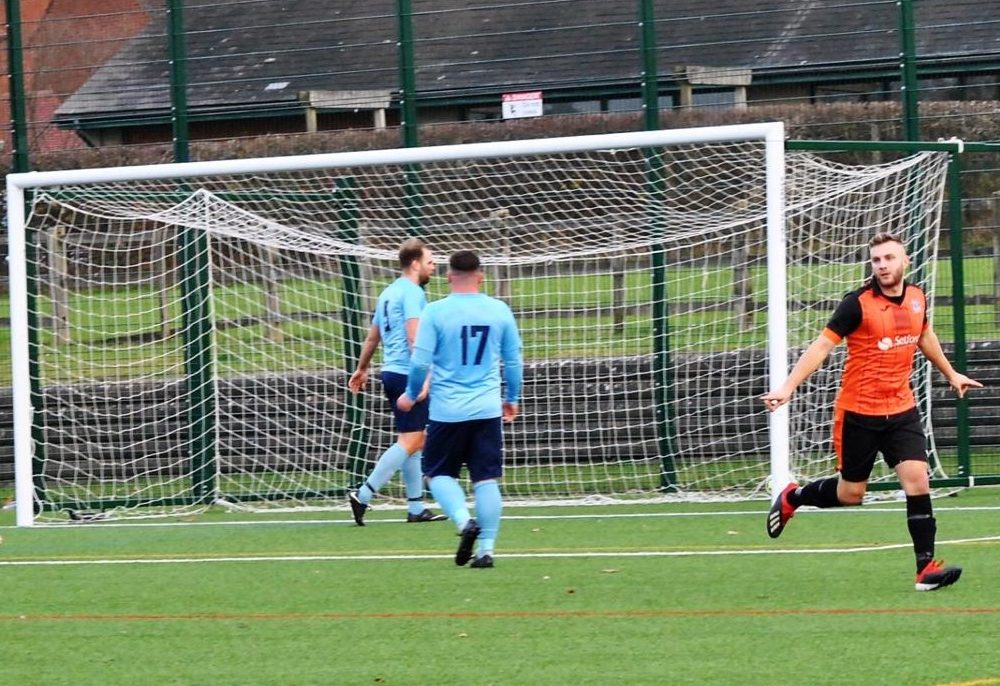 Guildford began the afternoon knowing they’d be in for a tough ninety minutes, as third placed Lightwater came to Kings College. The Doots had captain, Greg, back in the fold after serving his suspension and looked a strong XI as they looked for a much needed three points in order to keep up with Hambledon’s pace-setting in first position.

GUFC started very lethargically, and gave the ball away cheaply three times within the opening minutes. The third time they gave the ball away, Lightwater sprung into a counter attack and their left-winger was slid through who cut-in from the wing and finished at the near post past Malice. An awful start to the day’s action for Guildford.

Guildford had to up their game quickly otherwise they were soon to have a mountain to climb. Again, giving the ball away cheaply, allowed Lightwater to take advantage but, fortunately, the opposition skipper was ruled offside. After some choice words and head-shaking, GUFC started to find their rhythm and began servicing Bickers and Carpo down the channels of the Lightwater defence. At the ten-minute mark, Guildford were awarded a penalty after Bickers was clattered to the floor. Carpo stepped up for his third penalty in two games, but the attempt was saved. However, the keeper could only parry the ball back into Carpo’s path, who powered the rebound home.

The game was edgy and scrappy, with Lightwater challenging for everything and trying to ruffle feathers. This strategy caused Guildford to go down to ten-men, as Carpo lashed out after some aggressive attempts to win the ball. The referee saw his actions and reached for his red card. The mountain to climb was very real now, despite being equal on the scoresheet.

Despite the disadvantage after only fifteen minutes, Guildford managed to turn it up a notch and really started to thread the ball around the pitch expertly. Attacking predominantly down the left-side. This attack led to a typical LT throw that caused panic in the Lightwater box. The ball wasn’t dealt with and fell to Greg who volleyed it into the empty net from within the six yard box.

Two quickly turned to three as Bicknell, who was causing absolute havoc for the Lightwater defence, received the ball on the left wing, and managed to take it past three defenders before curling the ball into the far corner.

Before the half-time break, Bickers added GUFC’s fourth as he paced along the byline, beating defenders at will, beating the oncoming keeper and then retaining his composure to finish past the retreated defenders. Guildford needed a hero after going down to ten men so early on, and Bickers was certainly that as he tormented and terrorised for the entire 45.

United knew that they must manage the game given the circumstances, but endured the worst possible start. A nothing cross was whipped in that seemed simple enough to deal with, however, a communication mix-up meant that it was dropped at the feet of the Lightwater captain who smashed it past Malice and all of a sudden, they were back in the game.

The second half didn’t provide as much slick play as the first did, but Guildford still largely controlled the game and the tempo. Bickers, up top on his own, continuing to cause huge headaches for the opposition back four. Guildford also saw Ketch and Vinnie go off with painful injuries, and the squad was down to its bare bones.

Bickers managed to bag his much deserved hat-trick and regain Guildford’s three-goal advantage. Once again, he danced through the defence and calmly finished at the near post. Rounding off a goalscoring masterclass from the summer signing.

The game began petering out, when the personnel numbers were evened out, as the Lightwater centre-half was booked for the second time, for his second foul on Bicknell. As a result two further Lightwater players found themselves in the sin bin for aggressive protests. The resulting free-kick was struck well by Tids, who had bagged three assists for the afternoon, but the keeper made a fine stop.

Guildford lost their urgency and dominance in the closing stages, and Lightwater pulled another goal back after a series of corners led to the pacey left winger being fouled by Phil in the box. An incredibly soft penalty to award, but the captain placed the ball past Mal.

However, it was too little too late for Lightwater in a hugely entertaining fixture which had everything. Nevertheless, the major outcome of the match was Adam Bicknell’s sensational performance, and one of the best ever individual performances in a Guildford United shirt. A fantastic team effort to see the game home, and move onto next week with three points.