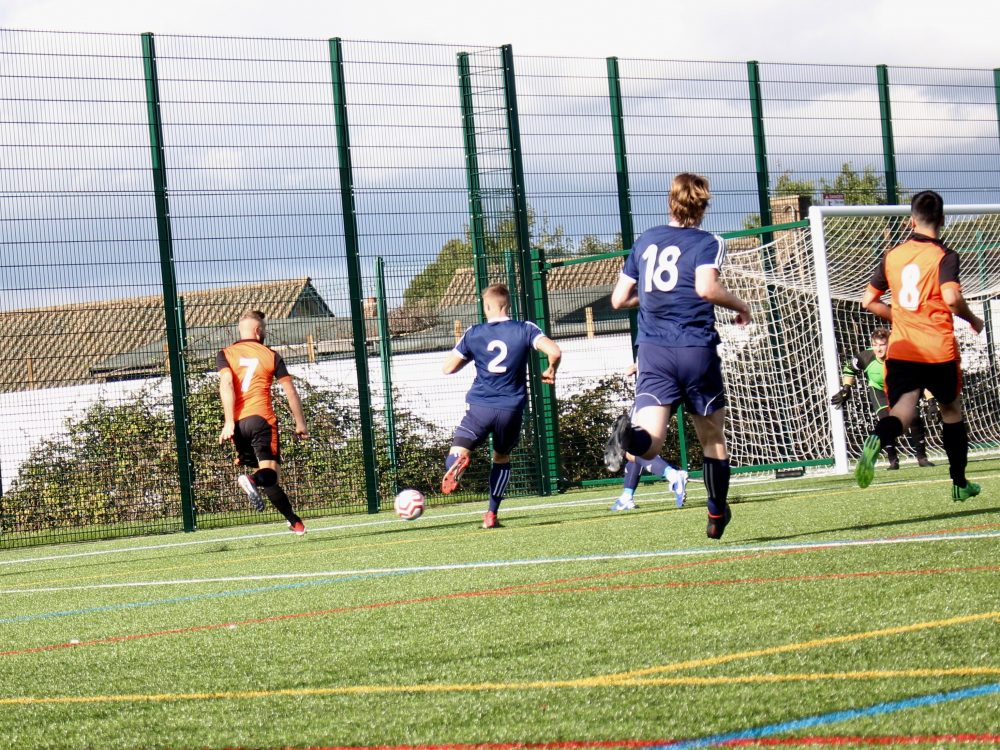 Guildford looked to get their league campaign back on track as Bicknell’s former club, Shottermill & Haslemere came to town. Shottermill proved tough opponents last season, with some exciting games shared between the two clubs.

GUFC started the game with a bang, after Shottermill pressed United’s kick-off intensely. The Doots managed to shift the ball around the press and break down the left wing with Dean storming past the opposition full-back. He paced into the box and was shoved in the back, with the referee rightly awarding a penalty within the opening 30 seconds. Bickers, slotted the ball home to get the tricky fixture off to a dramatic start.

Shottermill kept to their press and despite Guildford having the majority of possession, it proved their downfall. GUFC had began to overplay the football and were starting to get caught on the ball. Nobby, coming back into the starting line-up for the first time in months, lost the ball under his feet and was robbed by the S&H striker who managed to strike the ball past Mal to equalise. Not what Guildford deserved, but the boys were warned.

Guildford responded almost instantly after some great build-up play led Jonny to attempt a strike on the edge of the box, the ball was deflected and Bickers latched onto it, beating the offside trap, and finishing into the far bottom corner on the side-foot volley.

The Doots were truly in the ascendancy, and made their dominance count when they extended their lead to 3-1 after 35 minutes. Lewis kick-started a move from deep as Ads played a through ball to Vinny, who returned the ball with a back-heel perfectly back into Ads’ path as he ran onto the ball and curled it over the top of the keeper. His first goal for the lads in over twelve months.

United managed to put the game effectively beyond any doubt just before half-time when Bickers sealed another Doots hat-trick and, as a result, coming back to haunt his former side. An attempted through ball to Bicknell caused an error from the centre-back, and Bickers scooped the ball up, rounded the keeper and tucked the ball away.

Guildford United were wary of starting slowly in the second half. In their last outing versus the Uni, they struggled to kill the game in a strong position and gave themselves a fright. Something the boys would desperately want to avoid for a second consecutive week.

Clearly, the boys had learned from last week’s experience and looked comfortable on the ball, controlling the tempo. Stacey and Lewis being the key stakeholders in this. Whilst Mal had to come out and thwart a couple of attacks, he didn’t have much to do between the sticks, showcasing a strong performance from GUFC’s back three.

With 57 minutes on the clock, Guildford broke through and killed the game with their fifth and final goal. On the counter attack, Bickers beat the defender and raced into the box. Twisting and turning his closest opponent he managed to square the ball onto the on-running Stacey who buried the ball into the top left corner, his first ever goal in a GUFC shirt.

Few chances were created beyond this moment, except for first-team debutant Adam Lintott who almost managed to score with one of his first touches. Lintott, was just about to break free after nicking the ball from the centre-back with his head, but was caught by his studs which caused blood to pour, and unfortunately, he had his appearance cut-short.

Ads almost made it 6 in the dying embers, but a fine clearance from the strong centre-back meant that the game finished 5-1. An excellent performance all-around as GUFC march on in the league.