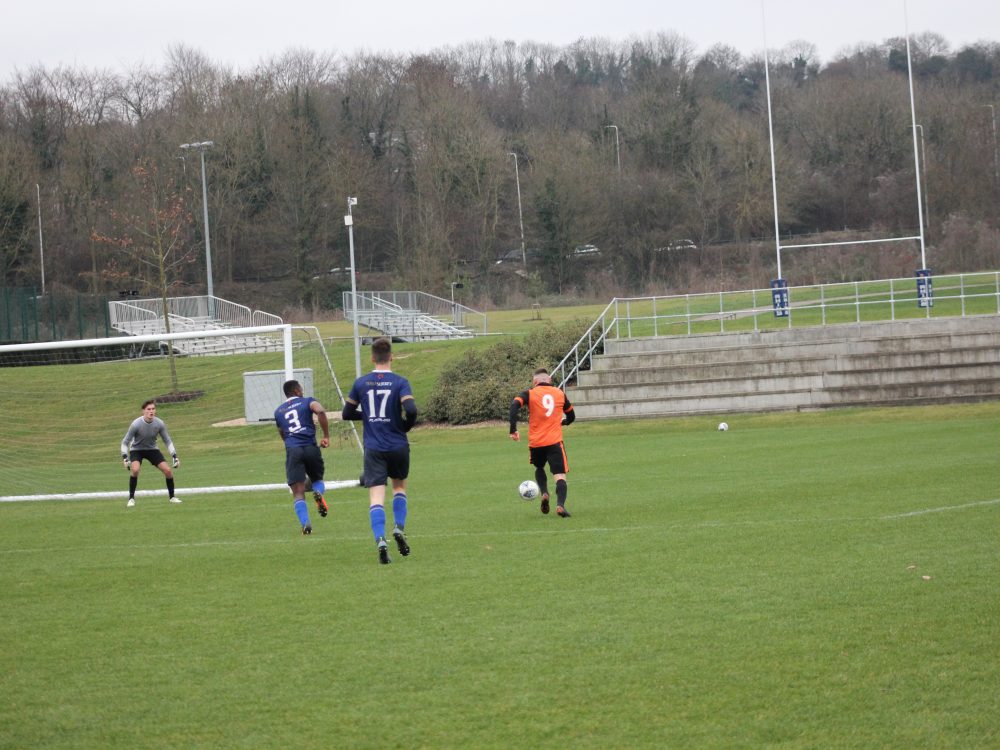 Following a tough away fixture against Hambledon last time out, GUFC were travelling to their neighbours, University of Surrey, for the County Cup Quarter-Final. Guildford hoped that the return of their striking duo, Carpo and Bickers, would reignite the team and be amongst the goals as much in the second half of the season.

On a cold and sunny day at Surrey Sports Park, GUFC kicked off as the more progressive and dominant side by finding holes and areas in behind the opposition back four. Carpo and Bickers didn’t waste any time in creating chances and causing havoc.

Bickers had a couple of decent chances in the early stages, but failed to convert as he was blowing away the cobwebs of a month out of action. Similarly, Ads failed to convert from a rebound, volleying the ball past the post from close-range.

Despite the missed opportunities, Surrey were not posing much of an attacking threat, and therefore it was just a matter of time until one of these GUFC chances hit the back of the net. After 25 minutes, Carpo netted the breakthrough as Bickers’ attempt was saved by the keeper who could only parry it into Carpo’s path, who knocked the ball in with his left foot.

Bickers couldn’t be kept quiet for much longer and with ten minutes of the half remaining, he scored his first of 2020 as well, as he powered an effort into the roof of the net after beating the opposing centre-back.

Guildford knew how crucial it was to kill the game off early and wanted to stretch their advantage from the outset. However, it was the University who bagged the first goal of the second half after some awful defensive play from GUFC, allowed the Surrey midfield to walk through the middle of the park, and after two attempts the opposing striker finished well with his left foot from fifteen yards away. Guildford needed to wake up immediately if they were going to book their place in the Semi-Final.

What ensued was nothing short of a basketball game, as the Doots almost instantly responded with a goal of their own. After a series of corners, Carpo took over the duties and whipped one in, for it to be flicked on by Bickers and tapped home by Phil at the back post. From the resulting kick-off, Surrey once again walked through the midfield before having attempts on goal, Guildford lucky not to concede, but from a resulting rebounded ball, a Uni player was judged to be fouled on the edge of the box. The Surrey goalscorer curled his effort over the wall and in between Mal’s hands as he struggled to locate the ball with the beaming sun in his eyeline.

United soon regained their two goal lead, as Ads intercepted a pass and found Carpo in acres of space who took a couple of touches before burying the ball past the on-rushing goalkeeper. The University once again responded with a goal of their own as the GUFC midfield struggled to cope with the shift in formation, and the opposition number 9 once again lashed the ball home.

Despite this chaotic half of football, Guildford simply needed to relax and take control as they dominated proceedings although they had conceded so many goals in such a short space of time.

GUFC made it 5-3, when a long ball was met by Bickers’ head which looped over the keeper who had tried to punch the ball to safety. Bickers’ return was certified when he claimed another hat-trick, after Tids’ free-kick was saved into his path, and he simply tapped the ball into the empty net.

Whatever Bickers can do, Carpo can also do, and he marked his return from suspension with a similarly impactful hat-trick performance. Bickers crossed the ball from the left hand side and the struggling defender failed to deal with the headed clearance, which fell to Carpo who volleyed the ball into the far corner.

With Guildford seeing out the game and keeping Surrey at bay after a frantic twenty minute period, another returning body in the shape of Nobby marked their territory by scoring at the death when a corner was crossed in and, in the midst of a scrap, he managed to pass the ball in from a few yards.

A decent performance but not without errors and things to work on, but fantastic to have two goal-machines back in action. Neither of whom managed to scoop the MoM award, as Lewis claimed this for a second week in a row after another towering performance in the holding midfield role. A player who has really stepped up when given his chance in recent weeks.

Guildford will play Sporting 50 at home on the 8th February in a huge Semi-Final, which will no doubt be an exciting encounter.