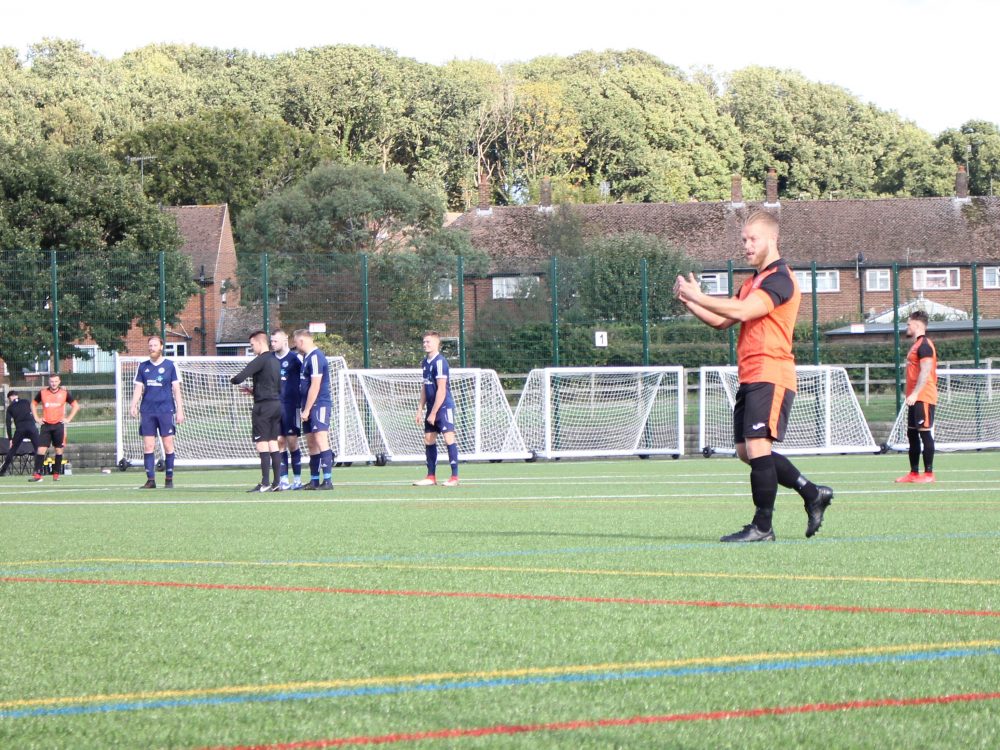 After suffering a disappointment in the semi-final of the County Cup last time out, Guildford were back in league action against table-toppers, Ottershaw. GUFC were five games behind their opponents, but knew how important a result here would be in their push for promotion.

On a seriously windy day, providing quite difficult conditions for the players, Guildford got off to a positive start, finding spaces between the opposition midfield and defence. GUFC started threatening early doors, with Greg, Stacey and Tids all finding space and delivering dangerous passes. It didn’t take long for one of these to find one of the prolific Carpo-Bicknell duo. Greg, had been played through on the right side of the box and cut the ball back from the byline. Bickers, quickest to act smashed the ball through the keepers legs from six yards out to take the early lead.

Ottershaw, looking fairly jaded in the opening stages were struggling to keep tabs on the multiple midfield runs and quick interplay. GUFC soon made it two, when an almost identical goal was scored, but this time from Carpo. Once again some fine play from Greg, beating his man on the wing, and whipping a low cross in for Carpo to meet early and finish with his unfavoured left boot. A fantastic start for the Doots.

The opposition had since gone down to ten-men due to a sin-bin for the Ottershaw striker. With Guildford smelling blood, the boys created further chances, but not quite finding their third. This was until Carpo had been played through one-on-one, as he pushed the ball past the oncoming keeper but was clattered to the ground. Carpo brushed himself down and finished the penalty coolly to make it 3-0 in a perfect first forty minutes.

GUFC, not the first time this season, allowed their opposition back into the game shortly before half-time as Ads was caught on the ball on the edge of the box, and the ball was whipped in and volleyed past Mal, who was left with no chance. A frustrating end to a terrific opening half.

The league-leaders began the second half with renewed confidence and looked really up for the fight, whilst Guildford were clearly trying to recover from the end-of-half blow. Ottershaw began putting more pressure on the Doots goal, and soon found their second. After some good build up play, an effort was ricocheted off of Phil and landed in the path of open midfielder who tidily finished past the outstretched Malice.

The fixture became a much more scrappy affair and quality subsided, as Guildford looked to regain control. The majority of this control being from Stacey who was outstanding on the ball throughout the afternoon.

After weathering the storm, GUFC began creating chances of their own, with Bickers hitting the post and both Carpo and substitute, Vinny, missing opportunities. However, on multiple occasions the strikers looked through on goal, only for the opposition linesman to have flagged the boys offside. These were questionable decisions at best as Guildford were desperate to seal the tie.

With Mal not having much more to do in the Guildford goal, the lads saw the game out and clung on to a huge 3-2 win, away from home. A terrific first half performance with a slight blemish, and a dogged second half showcased that this team can win matches in a variety of ways.