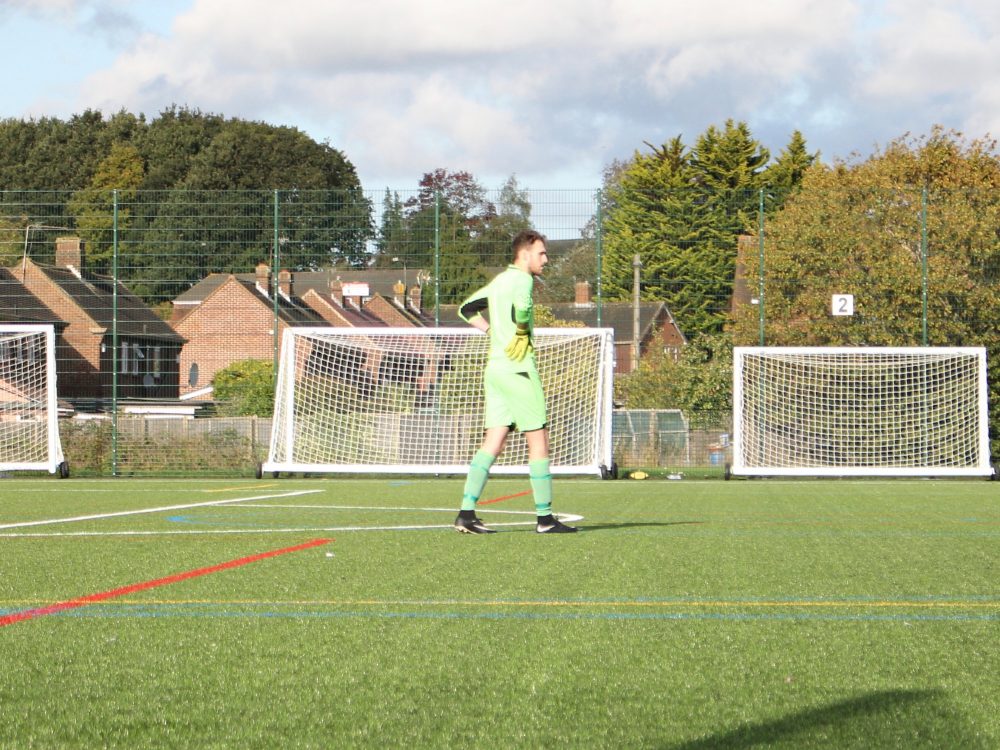 Saturday saw a big clash at the top of the table as Hambledon visited Kings College for the first time. In the reverse fixture, the Doots claimed a point in a toughly-fought 1-1 draw. They were looking for all three on their home patch.

Guildford started with real venom and took the game to Hambledon. Piling on the pressure with some great build up on the right-hand side. GUFC managed to break the deadlock early on, when a floated cross was glanced on by Jenko into Bickers’ path who finished calmly from a tight angle.

Skipper, Greg, had an opportunity to double the score quickly, but fired his attempt wide. He soon made up for it, as a cross from the left-wing was met by a strong header at the back post by Greg, but his header glanced off of Carpo into the net. A good “assist” from the benevolent captain!

Despite Guildford’s early dominance, Hambledon began working their way back into the game with their dangerous front-two stretching Guildford’s back three. It wasn’t long until Hambledon pulled one back after a scuffed attempt was blocked in the box, but fell perfectly for the on-rushing midfielder to sweep the ball into the empty net.

Guildford’s great early start was completely undone only moments later, summing up a hectic first half. Hambledon’s long-ball free-kick was dangerously deep and Nobby, in an attempt to nod the ball away, could only head it past Malice.

GUFC knew they had to find that early-match form in order to overcome their opponents and take home all three points. They started quickly, and it looked as though Bickers had escaped the back four only to be brought down outside the box. The resulting free-kick didn’t test the keeper, and the defender fortunately escaped with only a yellow card.

With Guildford’s mounting pressure, chances began to open up. Greg was once again in the mix when he drove at the back four and was taken out as he pushed it past the defender into the box. The referee deemed this to be outside the box, despite looking like a stonewall penalty. Carpo’s free-kick whistled just past the post, after Guildford’s protests.

With ten minutes remaining, and GUFC clearly having the upper-hand, the lads finally regained the lead after some great interplay on the right wing, Stacey laid off a back-heeled past onto Phil as he galloped into the box before almost walking it into the net. Guildford had the lead and looked confident to see the game through.

However, Hambledon came back with a real effort, desperately seeking a point. The opponents almost equalised when the ball whistled past all attackers. The Dons weren’t done however, and one last attack ensued. A chipped ball over the back three allowed the Hambledon striker to be one-on-one versus Malice, who rushed out and looked to have parried the ball away from the attacker’s foot perfectly. However, the referee had deemed this an offence and awarded a penalty to Hambledon. A very controversial decision in the dying moments when it looked like a clear and obvious foul on the goalkeeper. Hambledon converted the penalty, tying the game for a second time before the full time whistle.